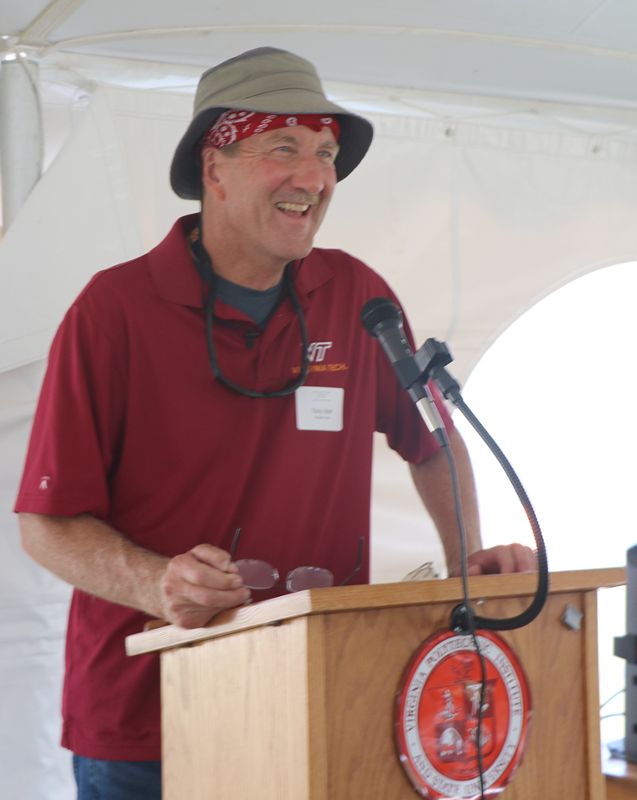 Wednesday, July 28 was your typical late July day in Winchester, Virginia – sunny, temperatures in the 90s, a few clouds in the afternoon which in places turned to thunderstorms later in the day. This Wednesday was different, however, as the Virginia Vineyards Association’s summer technical meeting at the Center for Agricultural Research and Extension (AREC) was held in person. For many attendees, this was the first meeting in over 15 months that wasn’t on zoom or webinar format.

The first sessions took place in the AREC research vineyard, located high on a hill overlooking the main building of the Center. Dr Tony Wolf, professor of viticulture at Virginia Tech, and Tremain Hatch, research and extension associate at Virginia Tech, reviewed some of the research projects they are currently working on. One is a Specialty Crop Research Initiative grant funded by the United States Department of Agriculture / National Institute of Food and Agriculture titled “High-Resolution Vine Nutrient Management. “.

Washington State University is the primary contractor for this grant. Virginia Tech is one of four other state wine programs – in Oregon, California and New York – participating in the four-year project. Baseline data on plant tissue analysis and cane pruning weight has been collected during the 2020 growing season and research data will be collected during the 2021, 2022 and 2023 growing seasons.

While chardonnay is used as a common denominator in all five states, Virginia is the only state to include a hybrid grape in its work. Chardonel, a cross of Seyval and Chardonnay, was introduced by the New York State Agricultural Experiment Station at Cornell University in 1990. Chardonel grapes are grown at Star-in-the-Valley Vineyard in the Shenandoah area of â€‹â€‹Virginia, and the second experimental site for Chardonnay research is at Bozzo Family Vineyard in Purcellville, Loudoun County, Virginia. Both vineyards were selected to be low vigor vineyards mainly because it is easier to implement a range of nutrient levels with a low vigor vineyard.

Some of the questions Virginia Tech is investigating:

The Virginia Tech research team at AREC also conducted experiments to determine whether an application of abscisic acid (ABA) in the fall will delay bud break the following April. Data collected by the team during the winter of 2019-2020 and again in 2020-2021 in a Cabernet Sauvignon vineyard showed that the application of ABA provided a modest delay in the timing of bud break: there was a 9 day delay in the cool spring of 2020, and a 3 day delay in 2021. ABA would not be an effective tool to protect a vineyard from a mid-May frost in the north of Virginia.

The efficacy tests of two Syngenta products, Aprovia Top and Miravis Prime, against powdery mildew, black rot and Phomopsis focused on an application at the beginning of the season. All treatments resulted in powdery mildew numerically lower than the control, sulfur # 5, and all products were significantly lower than the negative control where the vines received only Revus and Ranman. Miravis Prime and standard therapy both resulted in a significant reduction in the incidence of Phomopsis compared to the negative control.

In trials of the effectiveness of “additives” in improving the management of mature rot, researchers have focused on nutrients and plant defense activators. They found that Kendal (3-0-15) and Actigard (which is not yet registered for grapes) significantly reduced ripe rot in 2020. Kendal and Lokomotive were found to cause phytotoxicity on leaves in studies in 2021, and it was noted that potassium may not be welcome.

In another study in 2019-2021, the application of a protective shield to the fruit area in mid-season, between fruit set and cluster closure, was successful in reducing mature rot and wounds caused by the grapevine moth. Another project is to generate data for a novel biological control agent, ARK-1, which can suppress crown gall formation by up to 90%. Researchers are performing an inoculation test on graft wounds to see if the biocontrol agent can prevent gall formation.

[Authorâ€™s note: This is the first of two articles on the Virginia Vineyards Association Summer Technical Meeting held on July 28.]