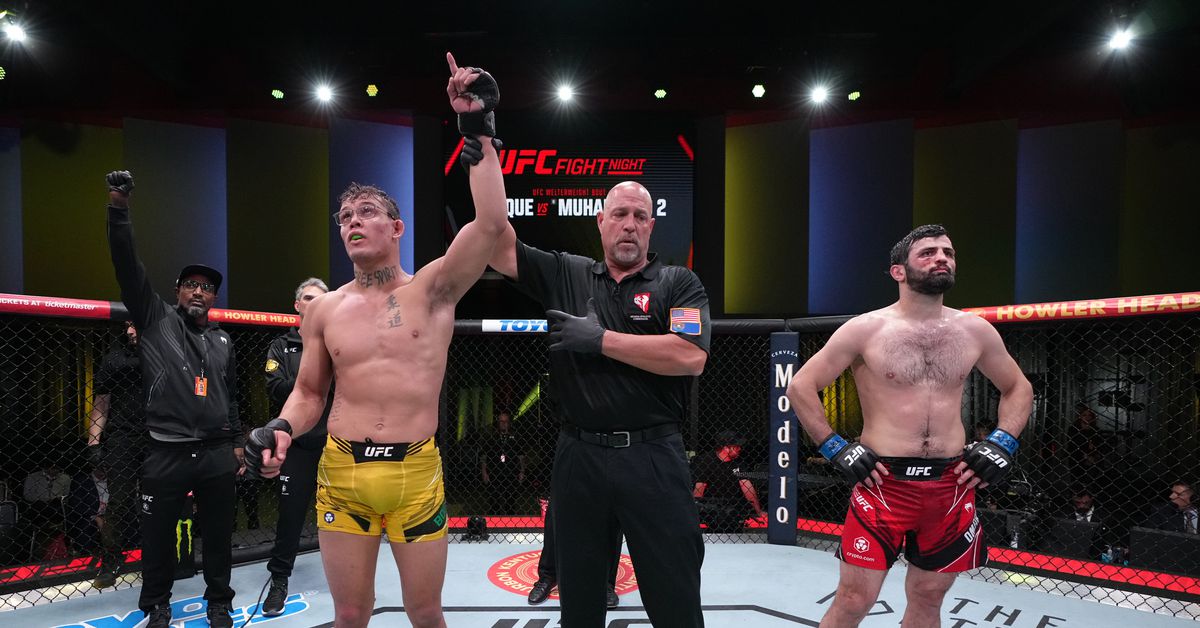 Caio Borralho didn’t get the win the way he wanted, but he’ll still leave UFC Vegas 51 with a win on his octagon debut.

As the Brazilian newcomer dominated the fight, he took a knee at the end of the third round with opponent Gadzhi Omargadzhiev’s hand still on the canvas, meaning he was considered a downed opponent. The knee hit Omargadzhiev with referee Dan Miragliotta rushing to call the foul which led to him taking a point from Borralho.

When Omargadzhiev couldn’t continue, the fight was stopped but Miragliotta then called Borralho’s strike an “accidental foul”, which put the decision back in the hands of the judges. All three officials scored the fight 29-27, with Borralho getting the nod by technical decision.

Prior to the bizarre stoppage, Borralho was winning lopsidedly beating Omargadzhiev in all facets of the fight, both on the feet and on the ground. Borralho threw several flying knees while showing great power in his strikes.

On the ground, Borralho was equally suffocating as he constantly put Omargadzhiev in trouble, including a near-submission with a stretch from Suloev. After two rounds, Borralho was big and likely heading for a win.

Knowing he was big on the cards, Omargadzhiev tried to ruin himself for the final five minutes, but Borralho was just countering every round with superior skill.

That’s when disaster struck when Borralho saw an opening to unleash a vicious knee strike and while Omargadzhiev’s knees were off the canvas he still had one hand down and that counted as an illegal move. Moments later, Omargadzhiev was still dazed from the shot and deemed unable to continue.

While Borralho was penalized for the foul with a point deduction, his strike was still ruled accidental in the end, allowing him to leave UFC APEX with a win as Competitor Series veteran gets a victory in the co-main event.