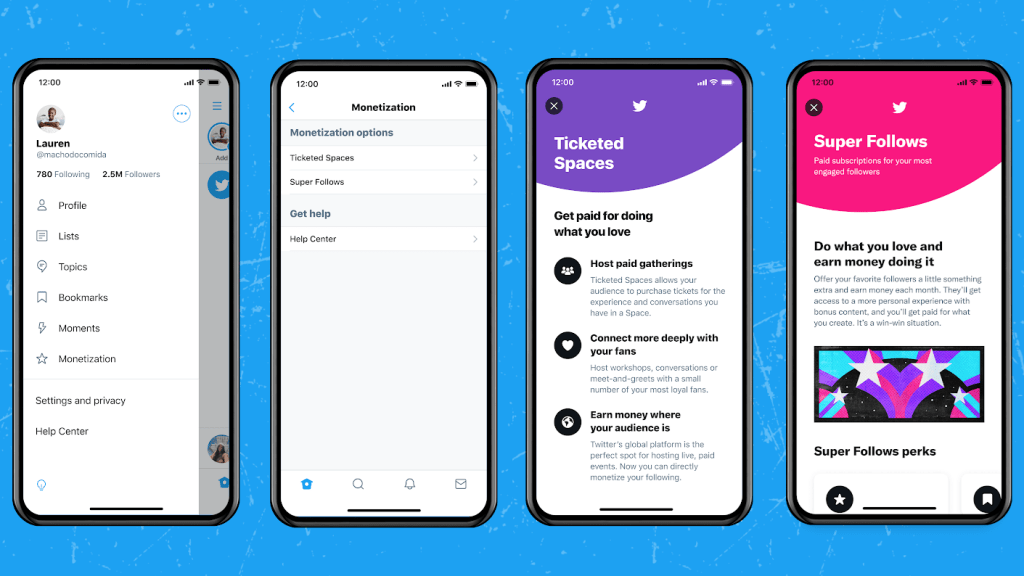 Twitter is opening apps for creators to test the first features that will allow them to make money on the platform – and it promises to give them a very generous slice.

On Tuesday, the social network began accepting separate apps for Super Follows (which allow creators to sell subscriptions with special perks) and Ticketed Spaces (paid audio chat rooms) for users to have a chance to be a part of. the testing period for paid offers before they are introduced more widely.

Twitter will allow creators to keep 97% of the income they generate through Super Follows or Ticketed Spaces. But there are a few caveats. First, the 97% split comes after the in-app purchase fee – Apple’s App Store and Google Play charge a 30% fee. Additionally, the 3% reduction in Twitter creator income will be in effect until an individual user earns $ 50,000 in lifetime income, in which case Twitter will take 20%.

According to Twitter’s senior product manager Esther crawford, the company “updated our revenue share cuts after spending more time thinking about how we might support emerging voices on Twitter,” she wrote in a thread. “Our goal is to uplift the people who lead the conversations on Twitter and help them make money.”

As to why Twitter set the $ 50,000 threshold before they started taking 20% ​​of the revenue, Crawford wrote, “Earning $ 50,000 + from Super Follows and Ticketed Spaces shows you get value from these features and that they help you make real [money emoji]. “

Creators can sign up for both Paid Spaces (available on iOS and Android) and Super Follows (iOS only). For now, apps are only open to those in the US and features are only available on mobile apps.

For Super Follows, Twitter allows creators to set three different monthly price points: $ 2.99, $ 4.99, or $ 9.99 per month. Creators can offer any type of bonus content and / or interactions reserved for subscribers.

Ticketed Spaces offers a way to deliver exclusive live audio experiences in Twitter Spaces, the recently launched Clubhouse-style feature. Creators can price the ticket as low as $ 1 and as high as $ 999 per event. Additionally, creators who host paid spaces can set the limit on the number of people who can attend each event.

10 roles to watch out for before his possible Marvel debut