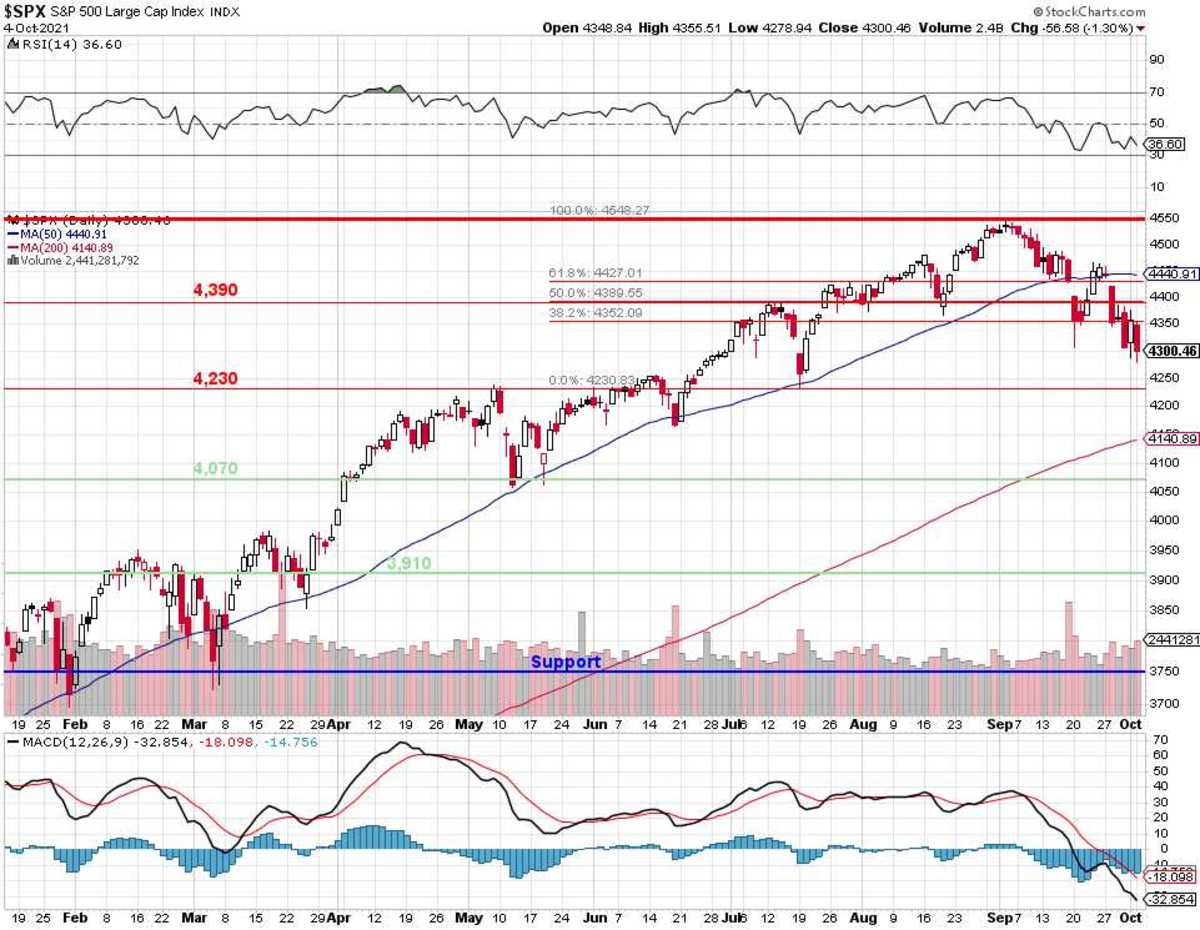 Technical Tuesday – Looking to bounce back

It’s the game for the S&P 500 this week, but we expect the fall, although raising the debt ceiling could save us a week and passing the infrastructure law could buy us a entire quarter before the inevitable correction ends. So far, nothing has stopped us from descending towards our strong retracement line at 4,230, which is our next stop, if there is no intervention but, for the day, we expect a rebound at 4,350, which is the strong Bounce line of 4,230 – a fall that we haven’t even experienced yet.

Quite simply, according to our 5% Rule ™, if you fail to bounce above the bounce line to a level that you haven’t even fallen to yet – then you will see that level very soon! This is how the failure at 4,440 warned us that we were going to take our next step down last week and now we HOPE to bounce to almost 100 points below or 4,230 – there we are!

Oil is at a 7-year high as OPEC concluded its meeting yesterday, sticking to its slow and steady increase of 400,000 barrels per day of production for November, relieving the pressure to go faster then as oil markets around the world are tightening and supplies to Europe run out. Europe is the wild card as a shortage of natural gas has caused more industrialists to turn to oil and that is the only reason demand is on the rise – nothing to do with an overall increase in demand which , according to GS and other manipulators, gives us a new paradigm.

US oil stocks have hit a low of 420Mb, at the same time they are leveling off each year and we are still in the 5-year average, which has been greatly exaggerated on the upside due to the year shutdown. last and that is now overdone. on the downside due to hurricanes, reduced supply to OPEC and the rise in natural gas, so oil is being used as an alternative by energy producers who can.

Not only that, but the US production has not yet returned because we currently produce on average 11.12Mbd in 2021 against 12.3Mbd in 2019, or 1.2Mbd or 8.4Mb less EVERY WEEK of US production – C ‘ is why our inventories are down 80 million barrels from last year’s level – because we produced 336 million barrels LESS US oil than we did in the first 40 weeks of 2019 – NOT because of OPEC and NOT because of increased demand.

This is why oil futures for next July are still at $ 73, just 10% above its usual peak of $ 68, even though the current price of oil is now 30% above. August lows ($ 60). Not only that, but look at all the automakers that advertise electric fleets, not to mention the global crackdown on carbon emissions that’s happening even in China and India and, dare we say it? – for the first time in 4 years – EVEN IN THE USA!

OPEC and Goldman Sachs are just trying to squeeze the last of their oil profits from you while they can, as demand peaked in 2019 and will likely never return to that level as every electric car sold uses 15 barrels less. than the 25. mpg car it replaces. 75 million cars are sold each year, and in 10 years almost all of them will be electric. At this point, gasoline consumption will drop by 1 billion barrels each year until we have a fully electric fleet around 2045..

10 billion barrels of gasoline less per year, that’s 27 million barrels per day, or about 1/4 of current world consumption in 20 years. It will burn slowly for the first 10 years. after that, nothing but pain for the oil industry because the automobile is not the only place where oil consumption will be greatly reduced. This is the future of oil – not record demand like the idiots at Goldman Sachs would have you believe.