A tall glass of cold tea at the end of an August heat wave. How interesting was it that the PPI, which is the Bureau of Labor Statistics’ producer price index, was cold-printed for July? Glacial.

Markets initially rejoiced, but then couldn’t hold on to the gains, briefly forgetting that financial markets rarely act broadly in response to producer prices. However, producer prices are important. When conditions are right for upward price pressures, it is often seen here first. Once the PPI is hot, there are only two potential outcomes at the point of sale to the consumer. Both of these outcomes are either higher consumer prices or some kind of margin squeeze. Or, perhaps, a shade of gray in between.

For July, the overall PPI came in at +9.8% year-over-year, which is the coolest of this series since seeing 8.9% annual growth in October 2021. Producer prices actually contracted month-over-month. The -0.5% figure missed the consensus expectation of +0.3% by a mile and represents a significant drop from June’s +1.1%. July 2022 was the coldest month for this particular item since April 2020.

Core PPI printed +0.2% month-over-month and +7.6% year-over-year. These two figures also represented a deceleration compared to June and were below the expectations of professionals.

The headline and core PPI confirm for us what we already knew, as indicated by the basic data from the Consumer Price Index (CPI) and Personal Consumption Expenditure data point series (PCE), which, for all intents and purposes, in the United States inflation peaked in March 2022, leaving the central bank in a position of aggressive posture with supposedly the intention to remain aggressive, although inflation has already passed its peak. Keep in mind that the Federal Open Market Committee (FOMC) has already moved its federal funds rate from zero to the current range of 2.25% to 2.5%, and that very little of what the committee has done worked, so far, to Main Street, USA.

As I’ve often mentioned, piling up aggression on aggression even though I don’t know the impacts of previous actions very well is unwise. Consideration could be given to allowing the Fed’s quantitative tightening program to do more lifting at this point and to continue removing the loss of liquidity that carried the nation through the economic crisis created by the pandemic. When it comes to short-term rates, the Fed is fumbling in the dark without fully understanding the public impact or the numerical location of its supposed neutral or terminal rates.

To keep things in perspective, this is where the work really needs to be done, and we really don’t know or understand what this outcome is going to do on Main Street, or even Wall Street.

Here’s what that same chart from early 2020 looks like. In September, the Fed will ramp up its quantitative tightening (QT) program until it allows $95 billion in assets to withdraw (mature without being reinvested) from the balance sheet. At this rate, without interruption, it would take about seven years and 10 months to reduce the Fed’s balance sheet to zero, or half that time to bring the balance sheet back to its pre-pandemic and post-financial crisis level.

As an economist, I had thought that a silver lining that might come out of the Fed’s tightening cycle at a time when economic growth was slowing (or even contracting) would be that the housing market might cool down and that younger and middle-income adults, who have been largely excluded from this market (distorting traditional rates of household formation) could finally get a break.

Sure, we’ve seen higher mortgage rates. The average 30-year mortgage the week of August 5 was 5.47% according to the Mortgage Bankers Association. That was down from 5.98% last June, but up from the previous week and up significantly from 2021. We’ve seen the pace of new and existing home sales slow. Yet market supply has dried up and prices have not eased.

The National Association of Realtors (NAR) reported Thursday that the median sale price for single-family homes rose 14.2% in the second quarter to $413,500. $413.5,000 at the median? How on earth are young families or families without resources ever going to get into this business?

I guess, and it’s really just a guess, that rising interest rates, a significant drop in liquidity, and a reduction in overall economic activity should support this price hike, sadly taking away jobs records with them.

Meanwhile, 184 of the 185 metro areas tracked by the NAR posted higher median year-over-year home prices for the second quarter. Only Trenton, NJ, fell back. An incredible 80% of these metro areas experienced median price growth of 10% or more.

Enough with the macro…

After all, I am first and foremost a trader/investor. Stocks rallied early Thursday to return most or all of it to the closing bell, depending on the metric used. The prices of energy raw materials have increased. Treasuries with longer maturities sold off, making yield spreads a bit less sickly. I said a little less. By the end of the day, the Dow Transports, S&P MidCap 400, S&P SmallCap 600 and Russell 2000 all held on to gains of 0.65% or less. The S&P 500, Nasdaq Composite, Nasdaq 100 and Philadelphia Semiconductor Index had all posted daily losses of 0.65% or less.

For the day, five S&P Select Sector SPDR ETFs turned green for the session, led by energy (XLE) and financials (XLF). These two funds rose 3.44% and 1.18% respectively. The losses for the six such ETFs that are shaded in red range from -0.01% (no kidding) to -0.65%. Cyclicals outperformed growth and defensives for the day.

The scope remained positive throughout the month, despite the poor overall performance of equities. The winners beat the losers by more than 3 to 2 on the New York Stock Exchange and around 5 to 4 on the Nasdaq, while the increase in volume took a 64.1% share of NYSE-listed composite trade and a 55.9% share of Nasdaq-listed composite trade. . Trading volume rose Thursday from Wednesday for names listed on the two major New York stock exchanges, significantly for names on the Nasdaq. Generally, I take the day as a slight positive. Leadership was provided by Disney’s (DIS) post-earnings push.

If by that you mean “Why did stocks jump and then pull back on Thursday?” the answer is technical, for large swaths of the equity market, we are making their first attempt with their respective 200-day simple moving averages (SMAs). This does not mean that our brand new bull market is over. It also doesn’t mean that our slightly longer bear market is back, although I’m sure the bear isn’t done with us yet. We still have a recession to go through.

But when it comes to our trading environment, what really matters if one has to rely on oneself to clothe and feed the family, the Dow Transports, Russell 2000, S&P SmallCap 600, S&P MidCap 400, Technology SPDR ETF (XLK) and Real Estate SPDR ETF (XLRE) all made runs at their 200-day lines on Thursday and failed to hold the level.

Will these indices and funds take their lines at 200 days? Like a moth in flame, my thought is that it is not one and done. There will be another attempt, and taking that level is not a high push in fantasy land. Five SPDR sector ETFs are already there – mainly defensive, but also energy and industrials (XLI). All the market has to do is fight the Fed. Oh oh.

Bloomberg News reported Thursday afternoon that Apple (AAPL) has informed its suppliers that it needs 90 million units of its latest iPhones this year, putting 2022 at around 220 million iPhones, which would be in line. at 2021 production levels. Interestingly, this comes shortly after Foxconn, which is an Apple supplier, said it was seeing signs of reduced consumer demand for smartphones.

Hmm. What do we see here? We now have some clarity in the Chevron (CVX) chart I showed you earlier this month. 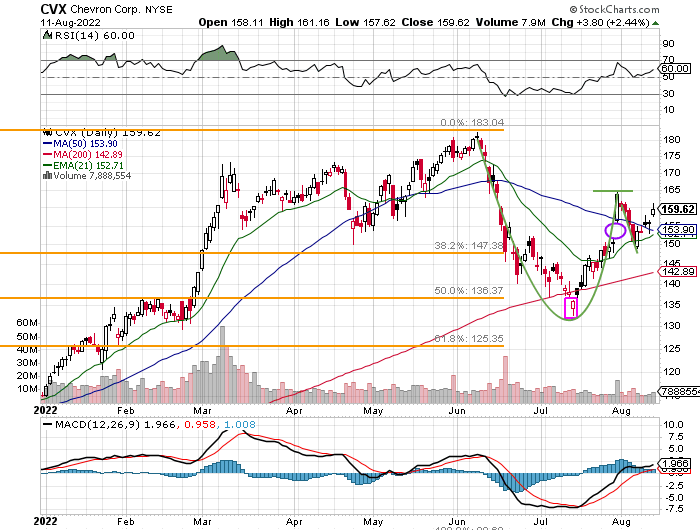 The developing cup I drew for you in early August added a handful that closed the once unfilled gap between $151 and $156. The stock rose on Thursday and could soon threaten the new pivot of $165. Relative strength and daily moving average convergence divergence (MACD) both exist in good conditions but not overbought. My belief is that taking and holding $165 could produce $198.

The Fed (all Eastern times)

Receive an email alert each time I write an article for Real Money. Click “+Follow” next to my signature for this article.