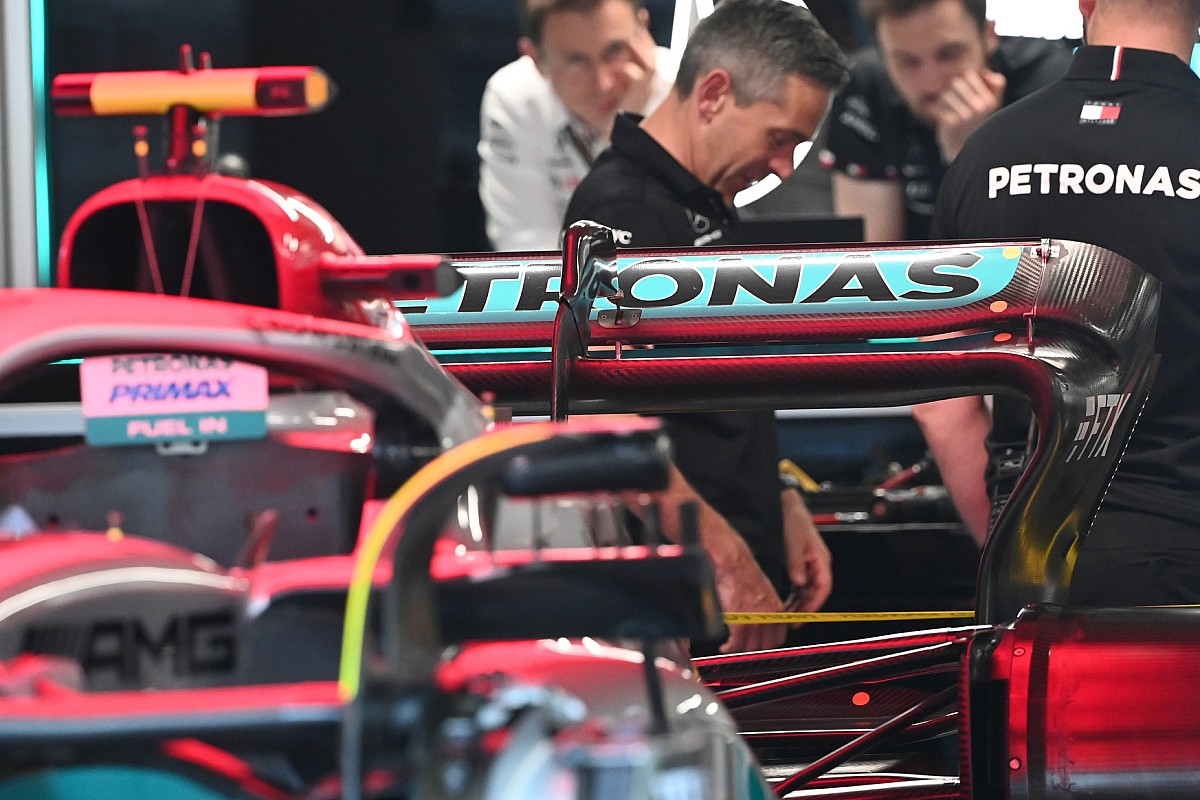 A look at the rear of the Alpine A522 and, in particular, the new beam wing arrangement that was introduced in Baku. Like Red Bull, Alpine has now stacked the elements, while another neat little detail is how the endplate flares out in the lowest section. Also note that it still uses the small vortex generators on the diffuser’s center transition line, as many teams used in the previous era.

The Alpine A522 rear wing assembly – also note the camber of the upper beam wing member from this angle. A small teardrop spot is also a nice little detail on the DRS actuator pod.

Under the chassis of the Red Bull RB18 we can see the mud flap wing and the design of the strakes and the front part of the underfloor tunnels.

Another photo of the Red Bull RB18 subfloor but given the angle we are able to see how the strakes and body geometry will influence the airflow.

A close up of the Red Bull RB18 front brake duct with the drum attached and lots of aluminum (surely aluminum if we’re in Canada? – Ed) ribbon applied.

A look at the RB18 brake duct from the other side shows us the used inlet and outlet, which should now both be on the inboard side of the duct.

Keep it cool in the Red Bull garage, as a bespoke fan is slotted into the RB18’s airbox. Dry ice can be added, if necessary, in the two chambers located on the sides of the main piping.

The Red Bull RB18 with a car-mounted spoon-shaped rear wing, note the Gurney flap on the trailing edge of the top flap, which can be cut or discarded to help balance the car.

Mercedes W13 with the low downforce rear wing fitted to the car as used in Miami and Azerbaijan.

A close-up of the W13’s front wing, note the flap supports which are made of carbon, when you would usually expect them to be metal.

Ferrari’s front brake assembly without the drum in place exposes some of the internal details, such as how airflow is channeled from the intake to the brake components.

A look at the Ferrari F1-75 from behind, with its step-like cutouts in the lower trailing edge of the brake duct fins, a very narrow center transition in the diffuser, and note the inward curvature of the diffuser in the top corners.

A close up of the nose of the Aston Martin AMR22 with the moving section of the front wing upper flap members still to be attached.

The Mercedes W13 front brake assembly without the drum attached reveals the piping used to carry cool air to the caliper which is mounted between 6 and 9 o’clock.

The W13’s brake duct end fence and deflectors, as well as a view of the inlet, which has a mesh in one of the segments to keep debris from building up.

The AlphaTauri AT03 front brake duct assembly – note the size of the inlet, with its various channels, protected by cables on some of them. The snorkel-like section continues at the back of the set where the heat generated from within is exhausted.

The AlphaTauri AT03 front brake duct assembly from another angle, showing the internal piping that supplies cool air to the brake components.

Moving to the rear, we get a similar view of the AT03’s rear brake assembly without the drum in situ.

Even farther back we have a good view of the AT03’s rear wing, which as you would expect is on the lower end of the downforce scale for Montreal.

Compare that with the spoon-shaped rear wing fitted to the Haas VF-22.

A look at the internal makeup of the Alfa Romeo C42 front brake assembly without the drum fitted. Alfa has, like other teams, opted for an internal enclosure for the brake discs this season.

Hwang In Yeop goes out of her way to protect Seo Hyun Jin from danger in “Why Her?”

A1 and A1(M) traffic: Overturned lorry near Radwell closes road for much of morning – recap