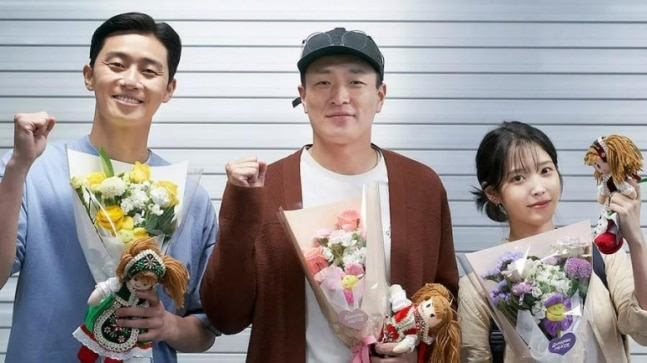 Popular South Korean actor Park Seo-joon has wrapped filming for his upcoming movie, Dream. He will be seen opposite IU in the film, which was shot in Hungary.

Park Seo-joon and IU have wrapped filming for their upcoming Korean movie, Dream.

Itaewon class star Park Seo-joon will be seen alongside IU in the upcoming Korean film Dream (working title). The two actors recently finished filming the film after working on it for two years. Created by director Lee Byung-hun, Dream traces the lives of a group of people playing football for the first time for the Homeless World Cup.

Park Seo-joon stars as Yoon Hong-dae, a professional soccer player on disciplinary probation. He becomes the coach of the football team. Meanwhile, IU will be seen as Lee So-min, a production manager making a documentary about the team.

Park Seo-joon and IU with the cast and crew of Dream.

The Dream crew wrapped filming on April 13, nearly two years after filming began in May 2020. The film, which was shot in Hungary, was delayed due to the Covid-19 pandemic. According to a report from Soompi.com, on the last day of filming, Park Seo-joon said, “Dream’s long journey finally comes to an end today. It’s a bit sad now that it’s over, but I’m very grateful that we were able to complete the shoot successfully. I hope moviegoers give it lots of love.”

Meanwhile, IU added, “It was my first time shooting a feature film. i think i will remember [this movie] for a long time because I created more memories than any other project. She concluded, “It was also a good experience for me personally, as I felt like I was becoming brighter and more carefree acting as So Min. I hope moviegoers will smile a lot with Dream and also feel the warmth of the movie.

Dream will arrive in theaters once post-production work is complete.