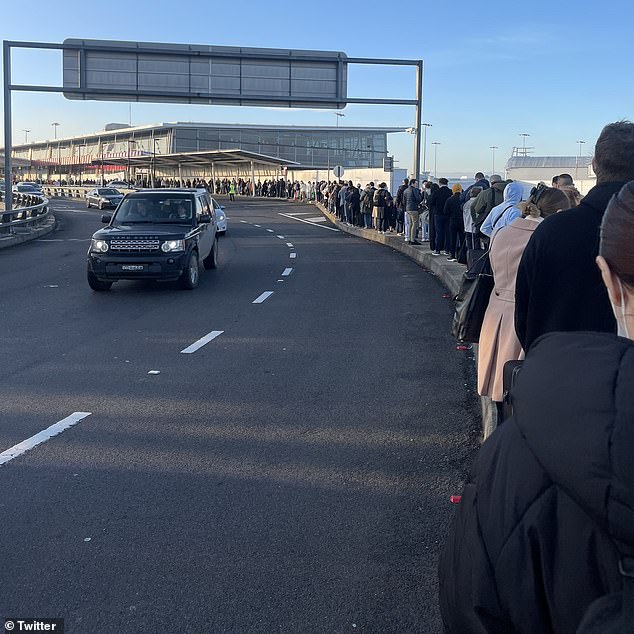 Thousands of travelers have been forced to wait outside Sydney Airport in the cold as early morning fog causes massive flight delays and endless queues.

A huge queue stretching across the road outside the terminal was seen on Monday morning as frustrated travelers waited to pass through security.

As the fog cleared just before 9 a.m. local time, the airport warned that flights could be delayed for up to 40 minutes.

Shocking photos showed countless people queuing in the street, while inside the terminal, travelers had to queue at the back of check-in counters unsure whether they would be flying in ‘hour.

The airport apologized and said a technical problem caused one of its security lanes to stop.

‘We are truly sorry for the inconvenience. A technical glitch means that we are temporarily operating one less safety lane than normal in T2. We are working with the airlines to get everyone on their way, thank you for your patience,’ the airport tweeted.

Qantas flights were also delayed due to fog but the airline’s passengers were unaffected by queues at T3.

Travelers said trying to board their flights on Monday was a “total nightmare”.

Thousands line up inside the airport while others wait outside

Qantas also warned of delays for passengers traveling on Monday

“Worst security queue I’ve seen in 30 years of travelling,” one tweeted along with a photo of a line stretching hundreds of feet in length.

“I’ll probably be in line to go through security longer than I’m in the air,” said another.

“If people catch their flight this morning it will be a miracle,” read one tweet.

“I’m in the parking lot, waiting in line for the security check. I think I’m about an hour away from getting there. Travel really sucks,” said one woman.

“If you’re flying in from Sydney Airport T2 this morning and you’re not already there, you might want to reconsider.”

Thousands of people had to queue for hours on Monday

Sydney Airport apologized for the inconvenience