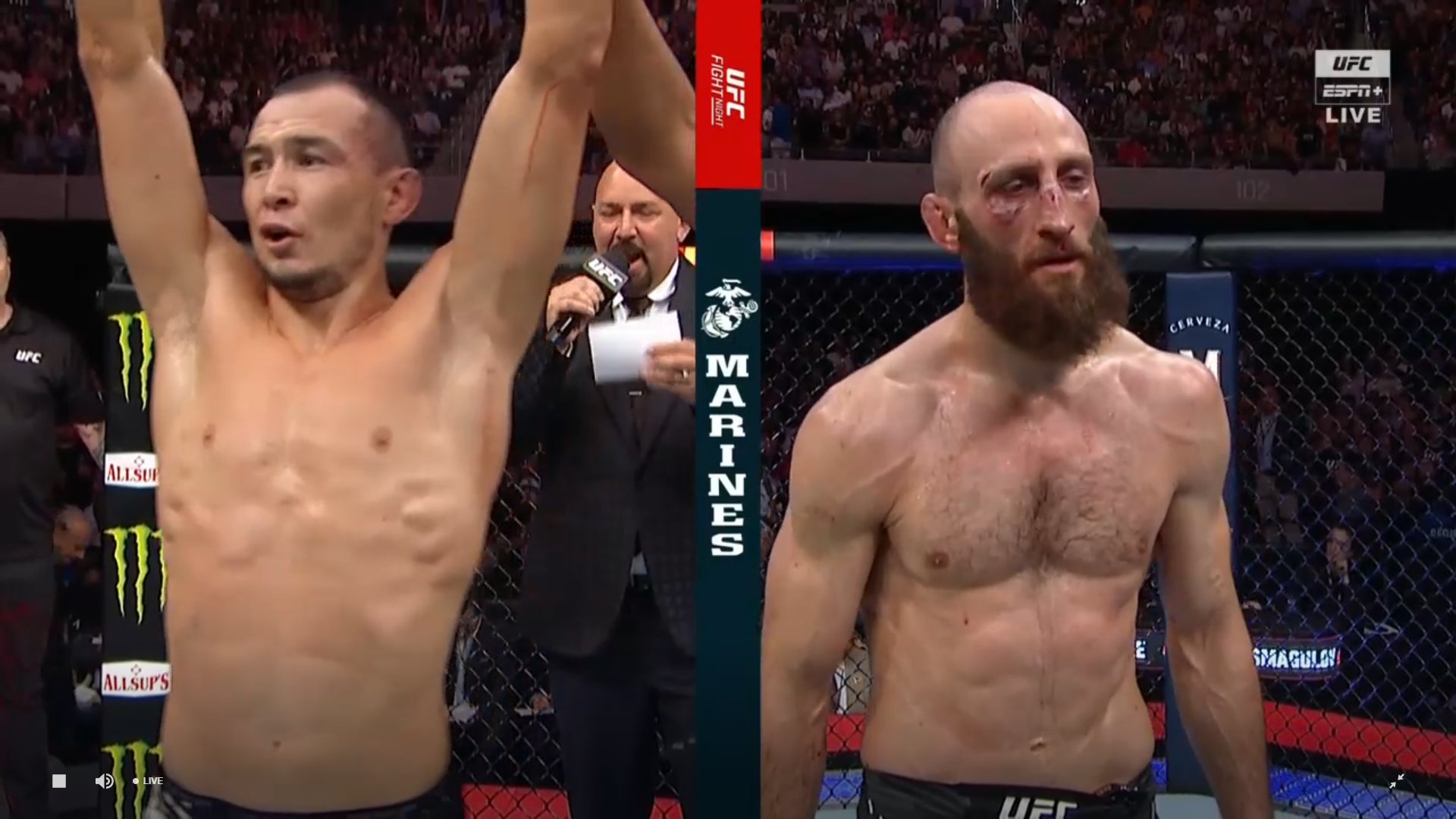 The Ultimate Fighting Championship returns to us tonight, June 18, 2022, for UFC on ESPN 37, live from the Moody Center in Austin, Texas.

The event’s headliner is a featherweight bout between a pair of ranked contenders in Calvin Kattar (23-5) and Josh Emmett (17-2), and the co-headliner is a welterweight showcase between Kevin Holland and Tim Means, as Donald Cerrone vs. Joe Lauzon fell short on fight day for the second straight time this spring.

Russian talent Damir Ismagulov (23-1) took on Georgian prospect Guram Kutateladze (12-2) tonight in the first fight of the night. Keep reading to see how this epic lightweight contest went down:

Originally ruled by majority for Ismagulov*

Ismagulov has already faced more adversity in the first five minutes than at any time in his first four UFC fights. He still does well, landing some nice counter punches, but the first round is all Kutateladze.

Kutateladze is able to press the action, landing more often than his Russian opponent, and he puts Ismagulov against the fence for a time where he is able to land a number of vicious elbows.

Ismagulov has a much better second round, as he dictates the center of the octagon for the majority of it. The first he passed paddling, but the second he held on and really threw his jab. He started throwing a cross behind and ended up landing some great combinations, but Kutateladze also landed a lot of his own.

It was a very competitive fight throughout the first ten minutes.

Once the third and final round was said and done, the striking totals between these two were ridiculously close.

The Georgian talent landed plenty of kicks and punches on every possible target, while Ismagulov landed more headshots on his opponent. Either man getting the judges’ approval tonight is justifiable. There was no loser in this fight.

If you liked this fight, do not hesitate to share it on social networks!

I became a combat sports fan at the age of 12. I was scrolling through the channels and landed on versus, where the WEC was televised. Urijah Faber fought Jens Pulver for the second time that night. It was the first fight I saw, and the fight that got me hooked on the sport. Since then, the sport has grown so rapidly, and my goal is to enlighten everyone on what is happening in sport today.